Although we had outdoor photos planned, the rain did not dampen the spirits of these newlyweds – or their bridal parties. And in both cases, the limo drivers provided exceptional service.

Kelsey & Josh’s wedding had rain following the ceremony, but were treated with a rainbow later in the day. 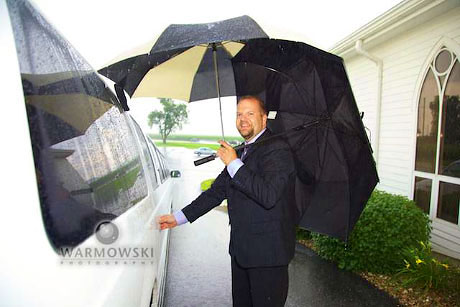 Executive Transportation's Jeff Hardwick is ready with multiple umbrellas to help the bride, groom and bridal party into and out of the vehicle. **Photos Copyright Warmowski Photography 2010**

Tiffany & Steve Warmowski photograph weddings in Jacksonville, Springfield and elsewhere in Illinois, as well as throughout the world – in any weather.