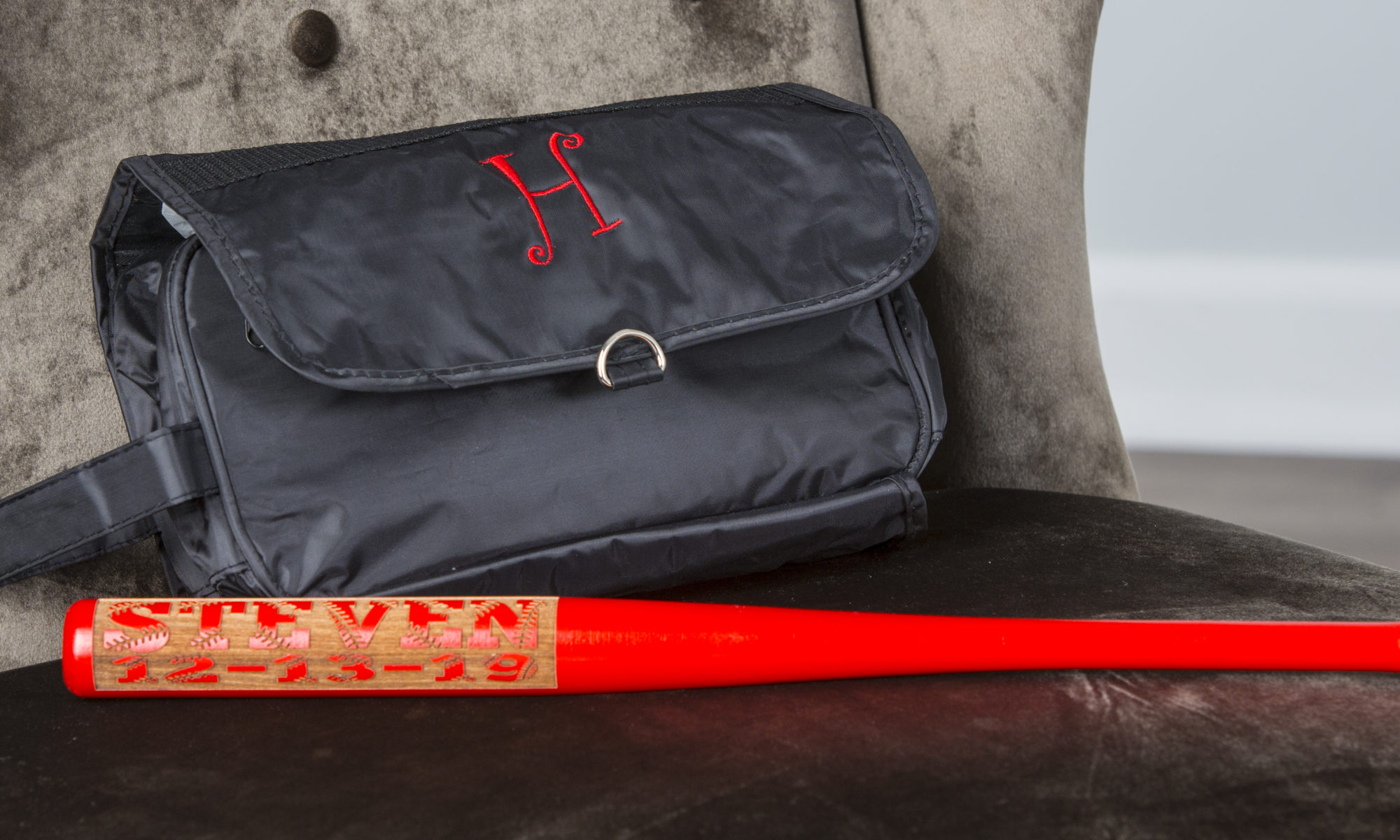 Many couples get stuck when trying to think of great gifts for their attendants and family members. You want them to be creative and meaningful, but not cheesy. And let’s face it, everyone has a budget they need to stick to.

I recently partnered with two awesome websites – groovygroomsmengifts.com and bridesmaidgiftsboutique.com. Each site sent me samples of meaningful items that would make perfect gifts for your attendants.

After the decision was made to gift these items to one of our couples, I chose a roll-up bag for toiletries with the bride’s initial – perfect for getting ready on the wedding day as well the honeymoon. This high-quality bag is big enough to hold everything you need. You can find the direct link here.

For the groom, I chose an engraved bat with his name and wedding date in red, the color of the couple’s favorite baseball team – the St. Louis Cardinals. Check out the photos for a close-up of the quality engraving. You can shop for and customize the bat here.

Thanks to both of these sites for letting me showcase their gifts! They were easy to choose and customize. I will be ordering from them again!

And a special thanks to Rotary International Exchange Student Tudor Balint (from Romania) for taking photos with us at the pageant!

One of the things we say on our web site is we’re available for wedding photography around Central Illinois as well as Chicago, St. Louis and beyond. That “beyond” this year includes north Dallas, Texas for Emily & David Clatterbuck’s wedding.

Tiffany went to MacMurray College in Jacksonville (she has a degree in Deaf Education, but that’s a topic for another blog post). Her mentor was David’s mother Claire. When asked if we would be interested in going to Texas for a wedding, the obvious response was “yes ma’am!”

The ceremony at St. Francis of Assisi Catholic Church in Frisco was gorgeous. The Piazza on the Green in McKinney is an incredibly beautiful reception hall.

Emily & David had a Rolls Royce to take them for the nearly hour drive “just down the road” between the two spots. We had to plan for extra driving time between locations. It was six-lane (three each way), 60mph road with new construction everywhere. A bad experiment with a toll road (stay off unless you have to – there’s no toll booths, no way to pay online.)

What they say about “dry heat” is pretty much true. It was only a degree or two difference in weather back home in Central Illinois – but it was way more comfortable down in Texas. By “comfortable” I mean if you stay in the shade. We had to plan outdoor portraits with the least amount of time in direct sunlight.

The bride and groom met in college while competing against each other’s schools (David went to University of Wisconsin-Madison, Emily to Notre Dame). Their first dance was breathless to behold, so elegant.

So great to be able to do a destination wedding down in Texas!

The biggest compliment we can get as wedding photographers is when family members love our pictures and service so much that siblings ask us to photograph their wedding.

Tiffany has a series of question she asks couples when meeting to help plan their wedding day (and wedding day photography). One is “what part of the day are you most looking forward to.” For the groom, it’s usually the reception. But for Jacob, he said it was the ceremony. And because Sarah and Jacob chose not to see each other before the ceremony, Tiffany joked that when he saw Sarah for the first time, hopefully there would be a good reaction.

Well, come the wedding day at Lincoln Avenue Baptist Church in Jacksonville, there was quite the reaction! Jacob was pretty nervous before the ceremony. When he made it to the altar, he said he was trying to look down, to not look to the back of the church. But when he did, this was his reaction . . .

Reception was at Hamilton’s 110 North East. Flowers by An Event Design. See a “sneak peek” of their wedding photos on Facebook. Wedding photos will be on their gallery (password will be off after bride & groom get a first look).

See a couple images from Sherie’s wedding on Facebook.

We were able to provide wedding photography for Wan-Yuan & Josh 23 June 2018 in Champaign-Urbana.

Wan-Yuan was a graduate student at the University of Illinois – Urbana, when she met Josh. Their first date ended up at the Illini Union, and that was where they had their ceremony and reception.

We took the bride and groom to Wan-Yuan’s graduate housing in Urbana, and their favorite restaurant in Champaign for portraits.

The ceremony started with a traditional Taiwanese Tea Ceremony. A traditional Western ceremony followed in the South Lounge of the Illini Union. Half-way through the reception, the bride changed into a traditional red wedding dress.

Congratulations to the bride and groom!

We tell people we travel to “Chicago, St. Louis and beyond” for weddings. This time we traveled to Chicago to photograph Meghan & Aaron in their Rogers Park neighborhood of Chicago.

It’s so great to be able to photograph our couples in locations that are special for them. Meghan & Aaron live on the Lake Michigan lakefront, and we took them around Loyola Park and Loyola Beach, looking for great photo spots. Aaron takes the Red Line all the time, and knew where all the good murals were located.

A fun evening that produced images that reflect where they love to go on dates! See a full gallery of images at warmowskiphoto.instaproofs.com.

We would like to give a little information about the images in our new bridal show flyer. If you saw us at the Elegant Bridal Expo be sure to contact Tiffany 217.473.5581 to schedule a consultation.

Catherine Rose Ott placed as Top 50/50 Sales Winner. Thanks to all who bought tickets, for the funds go to the pageant winners to defer costs of state competition and other instances where they represent the fair.

Warmowski Photography is happy to also be a sponsor of the contest, and first place winners will get special photo cards.