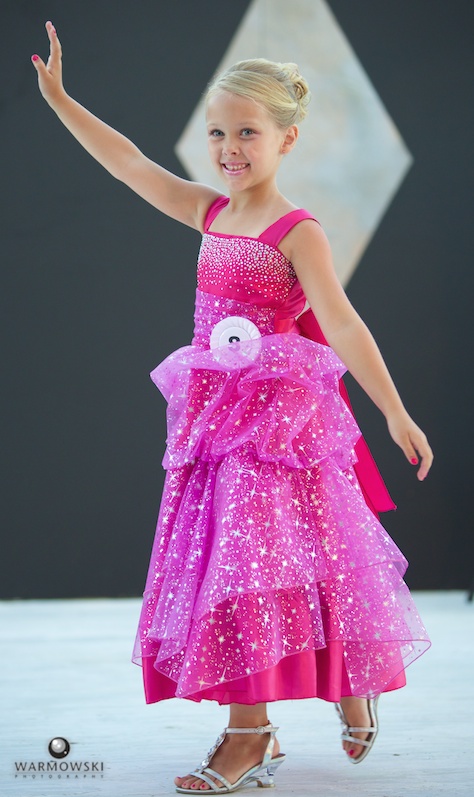 Check back at coverage 2010, 2011, 2012 and 2013 contests. Warmowski Photography is happy to also be a sponsor of the contest, and first place winners will get special photo cards.

And a note of congratulations and thanks for a great job to 2012 Queen Lauren Ashleigh Martin & 2012 Princess December Ann Mitchell for a wonderful year!

Check back at coverage 2010, 2011, and 2012 contests. Warmowski Photography is happy to also be a sponsor of the contest, and first place winners will get special photo cards.

Teri & Nestor Gutierrez, owners of Buena Vista Farms – Buena Vista Resort in rural Jacksonville (Chapin) Illinois, have been growing their business for years. On Wednesday night they had a fire in the banquet hall (their secondary wedding venue). They are working with their insurance company to rebuild, and have been making contingency plans for events that were booked for the barn.

In a letter to brides-to-be, Teri said “Buena Vista Farms is the brainchild of creative thinkers and hard workers. I am full of hope, faith, perseverance and determination to provide for each of you just like I would for my own children. There is great joy in accomplishment and I believe that we can accomplish together, with prayer, a day that is even better than you have imagined.” See full letter.

Their tent wedding venue was not effected by the fire, and weddings and receptions may be relocated there. They are also working on other plans. Follow Buena Vista Farms on their Facebook Page for updates. See story on WLDS radio (fire) (rebuilding) and the Jacksonville Journal-Courier. We have provided wedding photography for Beuna Vista couples and for the Gutierrez family, and here are some of our favorite photos which also tell the story of Buena Vista . . .

Kassie & Matt: Absolutely loved all the pictures from our wedding. We have gotten so many compliments on our wedding books and photos. You captured our wedding so well that I can look back at the pictures and remember everything SO very well. Thank you so much for your amazing work!!

Warmowski Photography will be running a photo booth for all the little girls and their dolls at Doll-i-Day next month at Hamilton’s 110 North East in Jacksonville.

The event will be Sunday February 17th from 1-4pm. Tickets are $20 (advance tickets only, no tickets at door) at The Source, County Market or Midwest Youth Services. All proceeds benefit Midwest Youth Services — a non-profit, United Way agency dedicated to serving at-risk, runaway, and homeless youth.

Besides our photography, there will be . . .

Thanks to all the volunteers who make this event such a great hit.

Steve is a Kiwanian, and invites everyone to buy tickets for the Kiwanis Club of Jacksonville’s Pancake & Sausage Day fundraiser.

Pancake & Sausage Day will be 6am-8pm Monday March 11th at MacMurray College’s McClelland Dining Hall. All you can eat! Express Drive Thru Service 3:30-7pm at the west side of Routt gym. Carry-Out available all day. Tickets $6 in advance or $7 at the door (children 5 and under free with paying adult).

Thanks for supporting Kiwanis as they raise more than $30,000 each year. All going to fund programs for children and the Jacksonville community.

Steve (with help from Tiffany) will once again be the “Loss Prevention, Recycling and Donation” chairman. A self-created position, towards the end of the day we collect all the left-over food and other supplies for pickup by the Salvation Army and the Spirit of Faith Soup Kitchen, and other organizations. 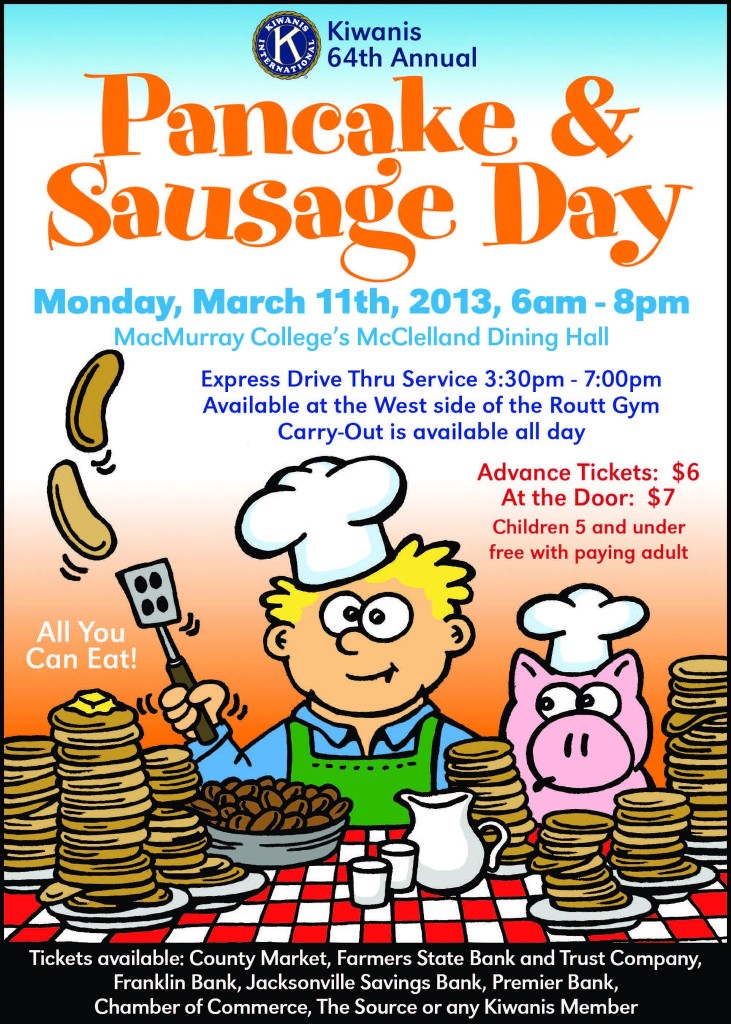 Thanks to Steven Varble for designing the promotional spot for the event. He’s always a great fella to work with, photography and design.

Tiffany is a Rotarian, and would like to invite you to join her at the Jacksonville Rotary Club’s 11th Annual Valentine’s Dinner/Dance Friday, February 8th at Hamilton’s 110 N. East in Jacksonville, Illinois.

Tiffany volunteers to run the high school exchange program for Rotary, and has represented the club on an exchange to Argentina. Steve also went on a Group Study Exchange to Sweden.

Posted by Steve. Quincy Illinois area wedding photography by Warmowski Photography, husband-wife photojournalist team want to tell the story of your wedding day in pictures. Follow us on Facebook. Studio located at 301 E Court St. Suite B, Jacksonville, IL 62650, open by appointment only. Be sure to check out our neighbors Girls in White Satin for formal wear for the occasion.

Some information from the University of Illinois – Urbana/Champaign (Steve’s alma mater) in case you or a high schooler you know is interested in a career in photography, reporting, design or advertising . . .

An exciting new opportunity is being offered by the College of Media at the University of Illinois. Media University – a two-week overnight summer camp (June 17 – 28, 2013) – will kick off for the first time this summer.

Media University will introduce high school students to the many facets of advertising, journalism, and media/cinema studies as viable college major and career choices through hands-on learning activities. It will allow students the opportunity to work on a real project; interact with University of Illinois faculty, ad agency and client personnel, journalists, and media personnel; and learn from current University of Illinois students.

But don’t think Media University students will spend all day in the classroom. They will explore all that the Urbana – Champaign campus has to offer, visit some of the top companies in the industry in Chicago, Indianapolis or St. Louis, and most importantly, learn all about the media industry. Whether students decide to pursue an education in advertising, journalism or media studies, workshops in leadership, diversity, ethics, and teambuilding will prepare Media University graduates for any professional situation. In addition, Media University will allow participants to meet other area students with similar interests who may become future classmates and colleagues!

Do you have or know a high school student that should apply? We hope that you’ll encourage them to explore the Media University website for details, application, scholarship and tuition information and more. Space is limited and applications will be reviewed beginning March 15, 2013. Diversity scholarships are available.

Springfield area wedding and freelance photographer Steve Warmowski was one of “approximately 100 of the world’s leading photographers in over 30 countries” to take part in the recently-released book The Human Face of Big Data. We recently received a couple copies of the book, which include a two-page spread of his images of Robert E. Holmes of the Astronomical Research Observatory.

The observatory is located at Robert’s home in rural Ashmore, Illinois. A self-taught astronomer, he uses telescopes of his own making to track for NASA a list of objects that might one day hit the earth. He takes multiple pictures of each questionable object, and then a computer crunches the numbers to give location, speed and trajectory data. In 2011 he tracked 14,900 objects — accounting for 36 percent of the total number tracked.

Robert actually is a former magazine photographer, and especially liked the photo Steve took of his cat napping while he worked.

This is the third time Steve was selected by Against All Odds Productions to work on a book project. Steve was the Illinois coordinator for the America 24/7 project, which was featured on the Oprah Winfrey show and was New York Times Best Seller, and also a photographer for America at Home.

Check out The Human Face of Big Data on the web, and they also have a cool iPhone app.

Steve also photographed for the book University of Illinois: Past & Present. He had an extensive newspaper career, including positions at Illinois papers in Jacksonville, Decatur, Freeport & LaSalle; and internships at Michigan papers in Muskegon and Saginaw; freelanced for papers such as The New York Times and Chicago Tribune. He has a journalism degree from the University of Illinois-Urbana. And he has won awards for his photography from the Illinois Press Photographers Association, National Press Photographers Association, Illinois Press Association, Illinois Associated Press and the Wedding Photojournalist Association; and recognized for editing by University of Missouri/Pictures of the Year.

Congratulations to the winners of the 2012 Morgan County Fair Pageant! Lauren Ashleigh Martin was named Queen and December Ann Mitchell was named Princess. (Watch video slideshow of favorite photos from the night). Lauren Ashleigh Martin is the daughter of Brian and Marianne Martin of Jacksonville. December Ann Mitchell is the daughter of Chuck and Tiffany Mitchell of Jacksonville

And a note of congratulations and thanks for a great job to 2011 Queen Calla Kaufmann & 2011 Princess Madison Davis. They had a busy year and served Morgan County well.

Check back at coverage 2010 and the 2011 contests. Warmowski Photography is happy to also be a sponsor of the contest, and first place winners will get special photo cards.

The topic at this month’s Springfield Local Wedding Favorites meeting was green weddings and how brides incorporate environmental sensibilities into their wedding day. We haven’t really been asked by our clients about steps for greening our business, but figure this would be a good chance to overview some of the things we do.

One thing to say is green is at our core, it’s not just something we are doing for marketing. From growing up with my dad flipping off lights and teaching a conservation ethic, to getting involved with environmental stewardship through Scouting and college volunteer organizations, to our trips to the farmer’s market and concern about health and the environment a part of our every day lives — this isn’t greenwashing or green marketing. This is an ethic and a consideration in al the things we do.

If you’re planning to use green wedding vendors for your special day, be sure to check us out and ask how we line up with your goals. Here’s an article from this month’s Audubon magazine with more ideas on the topic.

Posted by Steve. Warmowski Photography, husband-wife photojournalist team available to tell the story of your wedding day. Follow us on Facebook. Wedding photography for Springfield, Quincy and all of Central Illinois. Member of Springfield Local Favorites, a group of the top wedding vendors in Central Illinois (on Facebook). Meetings hosted at Northfield Inn & Suites. Studio located at 301 E Court St. Suite B, Jacksonville, IL 62650 in the Hamilton’s 110 North East building.