The Jacksonville Area Chamber of Commerce board chose Tiffany as their Volunteer of the Month for January 2012! She received the award at their board meeting today.

Ginny Fanning, president of the Chamber, said that Tiffany was chosen because she is a founding member of the Young Professionals Network, she regularly attends Business After Hours and Warmowski Photography participates in the Chamber Checks program.

We photographed Ginny’s daughter’s wedding in June 2010. Here is a blog post we did on Audra’s wedding theme and also one on her brother serving as her Man of Honor.

Posted by Steve. Warmowski Photography, photojournalists who love to be involved in their local community!

Congratulations to the winners of the 2011 Morgan County Fair Pageant!

Queen Calla Kaufmann gave a speech about her grandmother and her adventures in business with Stevens School of Dance. First Runner Up Maurissa Moulton is the sister of 1998 Queen Kendra Moulton. We photographed Kendy’s wedding reception back in our newspaper days, and photographed the weddings both her brother-in-law and sister-in-law in the past year. We’ve also photographed the wedding of 2006 Queen Sherie Kording and senior photos for 2008 Queen Amanda Jo Tendick.

We were proud to be a little part of the lobbying effort that garnered Catherine Rose Ott the People’s Choice Award for Princess. Her mother, Anita, bought some extra photo cards and handed them out to people as she looked for votes. That’s probably what put her over the top.

Posted by Steve. Warmowski Photography donated their services to the pageant committee, and awarded prizes to the winners. Tiffany & Steve Warmowski, top wedding and event photographers in Morgan County. Also offering senior portraits, family portraits & more. We’ll soon be moving to our new studio at 301 E. Court St. Suite B, Jacksonville, IL 62650 – next door to Girls in White Satin, first floor of Hamilton’s 110 North East. We are members of Springfield Local Favorites, a group of the top wedding vendors in Central Illinois.

Glad to work the fair with some wedding day friends — Ashley’s Petals & Angels and On the Clip Side. 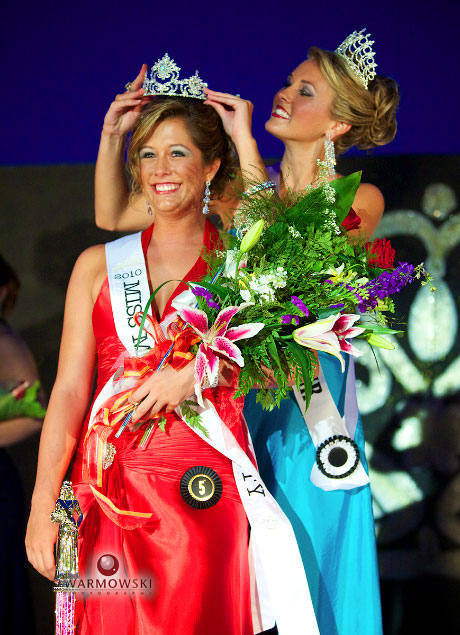 Congratulations to the winners of the 2010 Morgan County Fair Pageant!

Kate Fox gave a speech focusing on the importance of laughter, and commanded the stage with an air of confidence. We photographed Kate earlier this year as a senior maid in the Art Association of Jacksonville’s Beaux Arts Ball. Follow her on Facebook.

Grace accented her evening dress with a cast on her left arm. While playing tag with her little brother the week before the fair she tried to jump a ditch, but came up a bit short and shattered her elbow. Even after surgery to put in a plate and eight screws, she fought back to be on the 4th of July parade float and to compete in the pageant. Her mother Andrea (Kirkpatrick) Newman has a history with the Morgan County Pageant, winning Little Miss in 1983 and Queen in 1997.

Posted by Steve. Warmowski Photography donated their services to the pageant committee, and awarded prizes to the winners. Tiffany & Steve Warmowski, top wedding and event photographers in Morgan County.

Glad to work the fair with some wedding day friends — Ashley’s Petals & Angels, Executive Transportation and On the Clip Side; Jacksonville Illinois 62650.